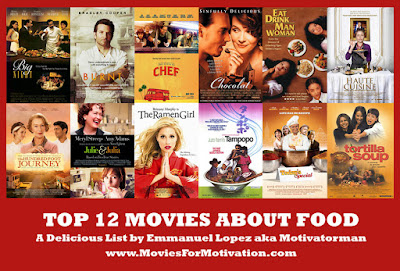 Two of my biggest passions in life have been the joy of movies and of food! These passions always excite my senses and lifts me up on the darkest of days. Just the sight of a beautiful and colourful meal thrills my eyes even before my mouth has tasted the delicious textures. The same happens whenever I see a scene in a film that features a lovingly photographed shot of tantalizing food or cooking.

I recently had a birthday gathering and gave a little gift of gratitude to friends for their love and support over the years. So I made my own improved recipe of extra delicious Rice Krispy squares with a graphic I designed for my top movie tips from different genres and motivational themes. Each person got a different graphic but the joy on each of their faces mirrored the joy we all shared whenever we eat meals or see movies together. Blissful! 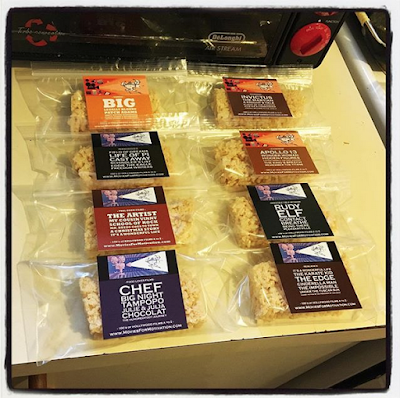 Putting together a list of my top 12 favourite films about food and cooking has taken years but has been extra fun compared to assembling other movie lists. And though there are many movies about food this list is based on the number of times I’ve seen it and how much my mouth waters when I see foods on the screen! For example I’ve seen Big Night about 8 times and love the story, food scenes and life lessons it offers.

The list also includes links in the film titles to posts I’ve written previously on my movie blog. 100's of film recommendations are now re-organized in alphabetical order and under motivational themes on my website: www.MoviesForMotivation.com.

I've loved documenting how films have helped me overcome burnout, depression and other difficult times. The sight, smell and taste of delicious foods also help me cope by elevating my positive emotional energy. So I hope you also view this list as an inspirational resource for re-energizing your spirit and drive when faced with adversities. These films are definitely a must-see for all movie lovers and foodies everywhere! 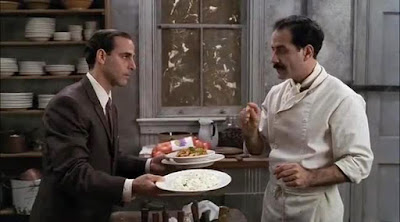 This comedy drama celebrates Italian food, family and friends. It stars Stanley Tucci and Tony Shalhoub as brothers and partners in their dream restaurant in New Jersey. The film is famous for showing the making of a glorious dish called Il Timpano that once unveiled onscreen had the whole audience express a foodgasmic “ohhh” at its premiere I attended in the Toronto International Film Festival back in 1996. It was a truly breathtaking and almost a religious experience! There are other wonderful moments showcasing food and how they bring love to friends and family. See: movie trailer

This drama film highlights fine-dining and what it's like to assemble an efficient kitchen staff and create a winning restaurant. It stars Bradley Cooper as a highly talented chef overflowing with egoistical arrogance who later learns to transform his poor leadership skills to match his skills in original cuisine. Lots of delicious food moments that includes a special, exquisite cake he makes for the daughter of one of his chefs. See: movie trailer 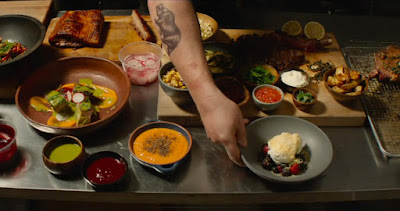 This comedy drama celebrates everything from innovative restaurant dishes to epic home-made grilled cheese sandwiches and to Cuban sandwiches made in a food truck! This became an instant classic foodie film which was the intention of writer, director and star Jon Favreau. He put in so much love and cuisine training into every food shot that you can practically smell the aromas of deliciousness oozing from the screen! And the movie trailer is truly foodgasmic! See: movie trailer 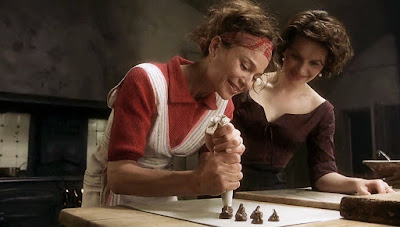 This romantic-comedy drama celebrates the joys, tastes and seduction of chocolate! It stars Juliette Binoche who opens a chocolate shop in a tranquil French town and helps its citizens to open up their hearts and passions to their families and neighbours. This film is brimming with chocolate scenes of delight and the fun of seeing characters enjoy a taste of a chocolate bon bon or a special glass of hot chocolate with chili peppers! Warning: This film may cause involuntary chocolate-gasms! See: movie trailer 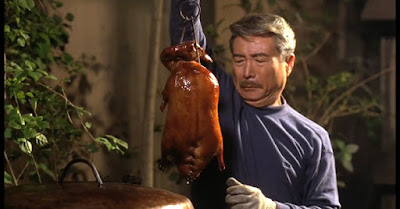 This Taiwanese drama celebrates traditional Chinese food and how lovingly integrated it is with family. It stars Sihung Lung as a semi-retired Master Chef trying to adapt to getting older and seeing his three daughters leaving home. The film is famous for its opening scene of six minutes that every food lover must see! It shows the Master Chef at home preparing a family lunch that is filled with so much love and care for each dish he creates. See: movie trailer 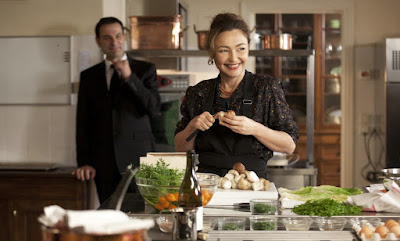 This French comedy highlights the fusion of traditional French home cooking and royal fine-dining. Based on a true story, it stars Catherine Frot as renowned chef asked to cook for the President of France. There are so many wonderful scenes of her creating special dishes for the President as well as showing how much care and passion she has for all her ingredients. See: movie trailer 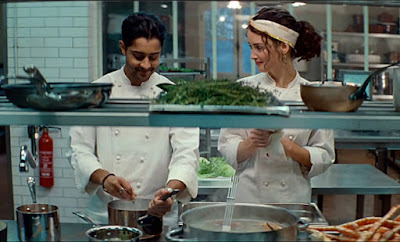 This comedy drama celebrates both French cuisine and Indian cuisine as well as the neighbourly acceptance and fusion of both cultures. It stars Om Puri and Helen Mirren as feuding restaurant owners and their chefs played by Manish Dayal and Charlotte Le Bon. This film was directed by Lasse Hallström who also directed Chocolat so it’s no surprise that whenever delicious meals are on screen that they are shot with lots of love and pleasure for the eyes! See: movie trailer 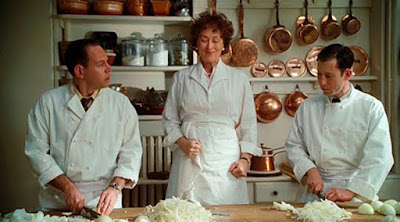 This comedy drama celebrates French cuisine as well as two true-life stories about following your passion into a successful career! It stars Meryl Streep as chef Julia Child and her journey to writing her first book along with food blogger Julie Powell, played by Amy Adams, whose goal is to cook all 524 recipes in Child's cookbook in 365 days. Of course this film is overflowing with food scenes that look absolutely delicious! See: movie trailer

Recommended articles:
Behind-the-Scenes: The Food in 'Julie and Julia’
The Chef who Cooked for Julie & Julia 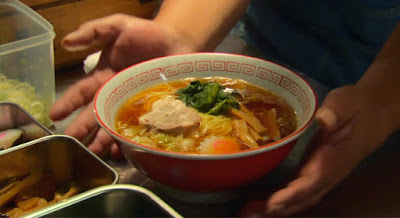 This romantic comedy celebrates the art of ramen soup as well as what it takes to follow a dream and deal with a major life changes. It stars Brittany Murphy as an American in Tokyo finding solace in a bowl of ramen and makes it her mission to master Ramen soup with the reluctant help of ramen chef played by Toshiyuki Nishida. The cooking process and philosophy is fascinating as much as the movie hero’s passion, perseverance and resilience. See: movie trailer 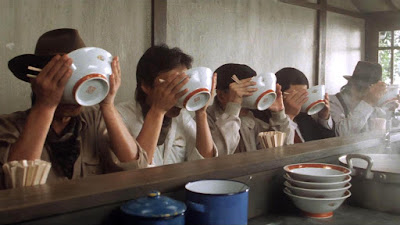 This Japanese comedy is an epic celebration of food, eating, sex and the art of ramen soup! It stars Tsutomu Yamazaki and Gorō Nobuko Miyamoto in a collection of different situations and characters exploring an aspect of food. It also introduces you to another culture's way of expressing a love for preparing meals. This was the first foodie film I'd ever seen and it somehow transformed my life because it demonstrated the combination of my two biggest passions in life which are food and movies! See: movie trailer

Recommended articles:
‘Tampopo’ Is One of the Best Food Movies of All Time
The Scene That Underscores the Brilliance of Ramen Western ‘Tampopo' 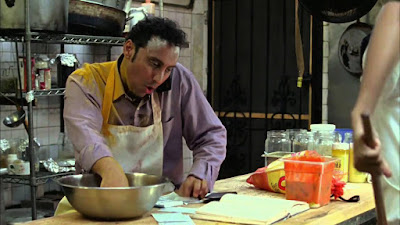 This comedy celebrates both gourmet dining and Indian cuisine as well as the love and forgiveness of family. It stars Aasif Mandvi as a sous chef at an upscale New York restaurant forced to take over his family’s Indian restaurant in Queens. This is a hidden gem with so many delightful, hilarious characters especially a taxi driver, played by Naseeruddin Shah, who shares his passionate wisdom of the art of Indian cooking. See: movie trailer 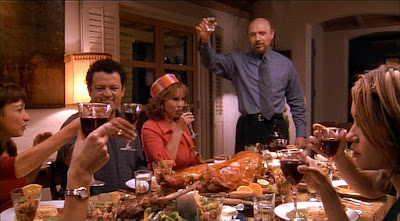 This comedy drama highlights the love and passion of Mexican cuisine and how it keeps family together. This American remake of Eat Drink Man Woman stars Héctor Elizondo as a veteran chef slowly loosing his sense of taste and just wanting his three daughters to be home for Sunday dinner. The opening scene is an extravaganza of Mexican dishes being prepared at home! See: movie trailer

Recommended articles:
Chefs do the cooking for `Tortilla Soup’ film

I hope you enjoyed this list and see this films as soon as possible! My passion for food, film and photography is also what fuels my Instagram channel as a resource for other people needing some inspiration in their lives with my personal stories. Both my Instagram and movie blog are all about how food and films have been fantastic tools and methods for improving my mental health especially when dealing with clinical depression for many years.

This is why food and films are so meaningful to be because they rejuventate and re-energize my indestructible optimism everyday! I’ve always felt a burst of positivity just looking at the colours and textures of a delicious meal in real life or in cinema. I've also learned to cook more nutritional, alkaline forming meals for improving my mental health. And I love document these meals and other delicious foods through my passion for photography and share via social media to inspire others dealing with difficult times!

The uplifting power of delicious foods, cooking and movies become even more empowering when you recognize them as mental health resources. Movies are invaluable tools and methods for inspiration and motivation. Combine the positive emotional energy you feel from foods and films and it becomes fuel for increasing your own positivity, hope and indestructible optimism! Treat yourself today by watching movies about food. You’ll be feeding your eyes as well as your heart, mind and spirit!

Other Food & Film Lists:
21 Movies All Food Enthusiasts Must See
25 Mouth-Watering Movies About Food, Restaurants & Chefs
23 Movies You Should Definitely Watch If You’re A Food Lover

Posted by Emmanuel Lopez - Motivatorman at 11:01 AM