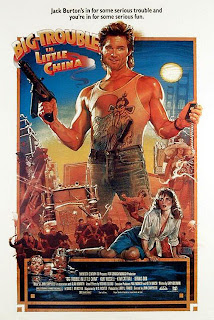 Nostalgia: A bittersweet yearning for things, persons or situations of the past

I recently attended the grand opening of a new movie lover's experience called the Toronto Underground Cinema. Situated in my own neighbourhood, the opening drew a full house and even a tweet by famed film critic Roger Ebert. See here

Opening night had a double feature of 2 cult classics, Clue and Big Trouble In Little China. Both were shown in the traditional 35 mm with all the film scratches and sound glitches of a pre-digital, surround sound world. They even showed film trailers from the 80's now looking joyfully cheesy!

Thanks to founders Charlie Lawton, Alex Woodside and Nigel Edward Agnew, the nostalgic feeling was amazing especially when shared by 700 other movie fans. And seeing Big Trouble In Little China was a surprise because after all these years it was still very entertaining and super fun to watch especially with a cheering, exuberant crowd.

was a unique mix of a Hollywood action film, witty comedy and Kung Fu sorcery when first released. It stars Kurt Russell as Jack Burton a cocky, all-American hero who actually does very unheroic (yet hilarious) deeds throughout the movie as he faces Chinese gangs and mystical warriors and creatures.

The film also starred a young Kim Cattrall famous today from Sex In The City fame. Seeing her was another surprise because she reminded me of how funny and spunky she was in this movie. And seeing the director John Carpenter’s name on the screen brought back memories of his other films I grew up with like Halloween, Escape from New York and The Thing.

Nostalgia is a powerful feeling and for a brief moment I was transported back in time to what feels now like another life. I was taken away from the stresses of my current life challenges and bathed in the form of cinema I knew and loved growing up.

So if you are in Toronto check up the Toronto Underground Cinema and get transported to your past. Share your passion for movies with people who share the same enthusiasm. And if you get that loving, aching, bittersweet feeling then you know you are bathing in nostalgia. Enjoy the feeling!

Posted by Emmanuel Lopez - Motivatorman at 9:52 AM