Tip#227: Repeat A Better Story For Yourself - Groundhog Day 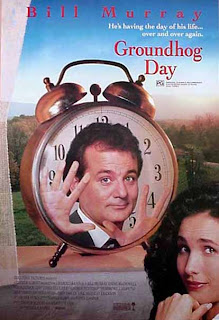 Once again my trust in going with the flow has paid off. Since returning Jan. 1st from my month long vacation in the US I was not motivated to dive right into my work. I was compelled to just focus on listening to 2 audio books over and over again.

One was Think and Grow Rich: The 21st-Century Updated Edition

(see tip#221) and the other was Money and the Law of Attraction.

Listening to these on my iPod earphones I could actually feel the information go directly into my brain reprogramming a new and improved mindset!

Then suddenly, in the last week of January, synchronicity led me to 3 major events. Or perhaps my new revved up magnetic mindset activated the law of attraction for goals I set up back in December.

as he gave a free seminar in Toronto. The next day I attended the HRPA Trade Show where I made some amazing business contacts connected to the Human Resources industry to share my motivational services with. 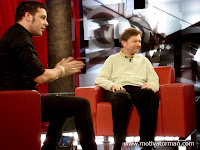 The crème de la crème of the week was getting front row seats for the live studio interview of spiritual teacher Eckhart Tolle on CBC TV's The Hour Show. It was a surreal experience being face to face with the author of The Power of Now

and A New Earth.

In his interview Tolle talked about his turning point when he was depressed and wanted to commit suicide one night. He had told himself he just couldn't live with himself anymore. That's when he realized that it was only his thoughts that kept repeating a story that he didn't want.

He realized that repetitive mental thoughts had built a prison for him and that he had the power to change his story. After that fateful night he found a purpose to live.

Tolle's story reminded me of what my own path from depression had been like. I realized that I could create new positive stories to replace old, repeating stories that had taken over my mind.

As I write this, tomorrow is Groundhog Day

so this is a perfect movie to mirror the positive messages by Tolle. In the film, Phil Connors was magically forced to live the same day over and over again. He soon becomes depressed and suicidal because he felt he could not free himself from this form of prison.

It was only when he surrendered to his situation that he began to live in the moment. By not dwelling on the past or worry about the future Connors began to live fully in the present. He learned to play the piano, be more helpful to others and transformed into a more loving, thoughtful man for the woman he loved.

He created a new and improved story he kept repeating day after day. And soon he was truly free of the times he once looked at as his prison.


Posted by Emmanuel Lopez - Motivatorman at 8:32 AM

Good that you got to see and hear Eckhart! I've been listening to a new earth in the car - so much better than the news!

I might just rent this film tonight. Thanks for all the work you do to inspire us!

Nice piece Emmanuel...I'm forwarding it on.

My favourite line of your post is 'live in the moment'. Too often I find myself trying to get to the future and loosing sight of what is going on around me right now. Thanks