Tip#228: Be Focused and Be Relentless - Taken 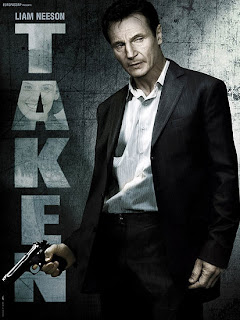 It's easy to give up on something when life or career issues feel overwhelming. But if you develop an optimistic mindset then nothing can stop you from getting what you want. Nothing like time or age will be able to hold you back.

It's been almost 10 years since I began my mid-life transition from having a successful illustration career to a more satisfying career in the motivational field. It's been a rough road but I've learned to stay positive. It's been a long time of cleansing for old, negative thought patterns and then reprogramming my attitude to have an indestructible mindset.

Movie heroes have been a big key in motivating me to persevere despite debilitating times of hopelessness. Recently I discovered a new movie hero who will motivate anyone at any age.

The movie Taken stars Liam Neeson in a role that makes him the most unexpected new action hero. Neeson's character Bryan Mills, a retired spy, is reluctant to allow his 17 year old daughter to vacation in Paris. His fears are confirmed after she arrives in Paris, kidnapped and forced into a slave trade.

That's when our movie hero inspires! He calmly takes control of his daughter's situation and makes it his primary goal to save her. He is focused and he is relentless. Watching Neeson's character behave like Jason Bourne or James Bond will inject you with positive emotional energy!

What was most inspiring was both Neeson and his character's age are in their 50's and demonstrate incredible self-confidence, persistence and fantastic physical skills. It reminded me of other movie stars and movie heroes like:

The men in these movies show that age is never a barrier for any goal or dream you want to achieve. That goes for women as well. The only barriers that exist are the negative thoughts YOU create that keep you from focusing on what you truly want.

So don't let excuses like age keep you from what you want in life or your career. Be inspired by these movie heroes to remain focused and relentless towards your own goals. Build a mindset that is optimistic and indestructible.

At any age you have what it takes to achieve whatever you desire. Believe it, feel it and then take action!


Posted by Emmanuel Lopez - Motivatorman at 9:22 AM

Thanks for this review. I will now go and watch this movie

Just saw the movie on your recommendation, and it was wonderful! I did find it extremely motivating to see a father on such a mission!