Tip#253: Recognize Your Core Values – Where God Left His Shoes 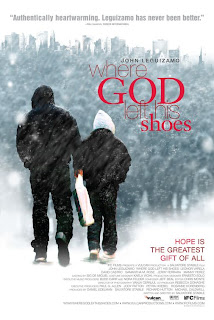 No matter what challenges you are hit with you must recognize and maintain your core values.

Emmanuel (Manny) Pacquiao is a professional Filipino boxer. We have 2 things in common, we are both Filipino and we have the same first name. He has become a big inspiration to the world. Manny recently underlined his status as the world's best pound-for-pound boxer with a second round knockout of Britain's Ricky Hatton.

In December of 2008 Manny also achieved a victory over Oscar De La Hoya despite pre-fight analysts predicting otherwise. Manny proved them wrong with his ferocious stream of punches and a genuine positive attitude. He is also a down-to-earth family man.

There are many inspiring movies about boxers such as Rocky and Cinderella Man. Here's one that is an unexpected gem.

Where God Left His Shoes

The movie Where God Left His Shoes is about a failed boxer Frank, played by John Leguizamo, who struggles to find a job and an apartment for his family on Christmas Eve. The realism of this family's homeless challenges will move you deeply and help you be grateful for what you have in your life.

Frank must find a job in one day in order to qualify for an apartment and this becomes a journey in recognizing his ultimate core values of love and family. Our current economic crisis can also be the catalyst for each of us to identify our core values and use them to fuel our optimistic mindsets in order to persevere.

One fact being kept out of the media is news of the shantytowns (tent cities of the Depression-era) growing in cities all over the US. Cities like Seattle and California's Fresno and Sacramento are showing a growing population of the homeless.

Recently President Obama responded to the tent cities saying it was "not acceptable for children and families to be without a roof over their heads in a country as wealthy as ours."

The realities of life's challenges can be overwhelming at times and can push you to the limits. Life can sometimes feel hopeless. That's why the hidden gifts within unexpected crisis are to identify your core values. Love and family are core values to be recognized and lived. They will keep you moving forward no matter what.

This is a great blog.

It's the first time I hear about this movie. You inspired me to watch it.

I want to rent Where God Left His Shoes, too!

You're absolutely right, Emmanuel. Knowing and then living your core values will help you survive anything because you can always focus on what's truly important in your life.

Thank you for reminding us to be grateful for what we have.