Tip#1053: Activate Your Imagination Through Movies, Part 3 - Valerian and the City of a Thousand Planets 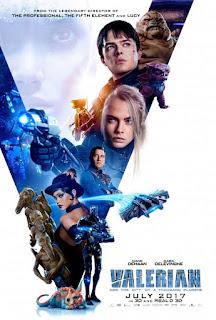 When I see delicious foods I always start eating them with my eyes! It’s the combination of scrumptious colours and textures that just excite me. As an artist, interesting visuals always stimulate my imagination. For example walking down grocery aisles can be a wonderland for me! Then, as someone who uses cinema to effectively relieve depression symptoms, the visual stimulus works on a healing, therapeutic level too.

When the first Star Wars film came out in 1977 it ignited my imagination and I would draw X-Wings and T-fighters all over my notebooks at school and at home! That film helped me develop my creative skills that later led to a successful illustration career. Decade’s later James Cameron’s Avatar film would activate my imagination and help me through some dark days and difficult times. It helped give my brain a rest from ruminating negative thoughts by escaping into a dazzling, colourful alien world.

And then in the summer of 2017 another epic film came along that transcended anything that came before! That movie would be created by famed visionary, writer and director Luc Besson!

Valerian and the City of a Thousand Planets (2017)

The science fiction action film, Valerian and the City of a Thousand Planets, is based on the French comics series about two special operatives in the 28th century, Valerian (Dane DeHaan) and Laureline (Cara Delevingne). That’s all you need to know because this movie will treat you to an explosion of visual creativity and imagination! See: movie trailer 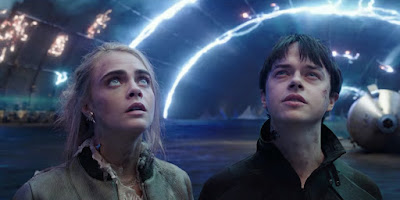 This film was pure EYE-GASMIC fun!!! I even had to use that new term to describe this kind of cinematic experience! Every scene was saturated with highly detailed creativity and imagination. The alien worlds and characters were so breathtaking and jaw dropping that I felt fully immersed into a new reality. On top of that there were fantastic inspirational and optimistic messages about mutual learning, loving and cooperation.

Despite some of its flaws, this visionary film reminded me of what I love most about exercising my imagination. And that is it helps me imagine and picture a better, more vibrant, healthier life when days look dark and hopeless. Imagination fuels my indestructible optimism and I hope you are allowing yours to do the same. It’s about activating a sense of play, wonder and childlike joy into your day when you need it most!

Whether you are an artist or dealing with mental health challenges always remember to keep your inner child alive and keep your imagination open. It will feed your abilities to imagine a better life and a better world to live in. It will allow you to picture a positive outcome in whatever adversity you feel stuck or hopeless in. It can help you problem solve the solutions that you seek. Activate your imagination today!

Posted by Emmanuel Lopez - Motivatorman at 6:52 AM