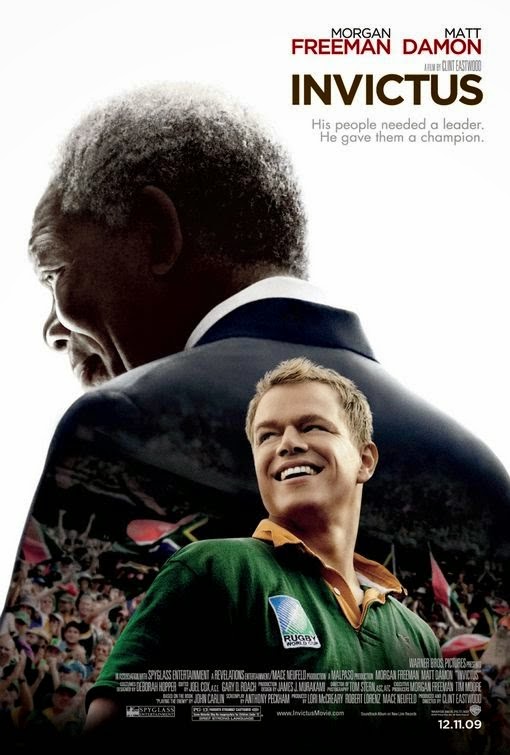 “We all need inspiration because in order to build our nation we must all exceed our own expectations.”
Invictus (2009)

I am currently enjoying a rare spring visit to a hot and sunny Las Vegas where the TV news was electric with the boxing match between fellow Filipino Manny Pacquiao and Floyd Mayweather. It was exciting to see the local news show these two sports leaders inspire countless people for this Las Vegas event. The Filipino community, boxing fans and celebrities featured were thrilled!

There are many sports related films that show leaders inspiring a sense of community support and team spirit such as the Rocky film series and movies based on true stories like Cinderella Man, Remember the Titans, Rudy, We Are Marshall and Secretariat. Here is another film that inspires with five teamwork stories in one!

The biographical sports drama film, Invictus, is based on the true story of South African President Nelson Mandela (Morgan Freeman) and his vision to unite his nation through the team spirit of rugby in 1995. Mandela asks François Pienaar (Matt Damon), captain of the country’s rugby team Springbox for help. This is an amazing, engaging story of accomplishing a seemingly impossible goal to win the Rugby World Cup that also includes a fantastic performance by Freeman. See: movie trailer

Within the film are five inspiring stories of five teams: Mandela’s staff, his security team, Mandela with rugby team captain, the rugby team and the citizens of South Africa.

1) Mandela’s Staff:
Mandela has a dedicated staff even though, at first, found it difficult to support his vision for unifying the country. And when he breaks down from exhaustion his team works together to follow doctor's orders and help Mandela get the rest he needed.

2) Mandela’s Security Team
There is immediate friction when Mandela’s all black security team are made to work side by side with an all white security team. Throughout the film you’ll see how they learn to work together and how the rugby events eventually unite them.

3) Mandela with Rugby Team Captain
Mandela first teams up with Pienaar at a sit down conversation to share his vision to win the World Cup. Since then Mandela encourages and inspires him to exceed his own expectations. Pienaar in turn shows his trust in the President’s request by giving him no arguments or negative attitude.

4) Springbox RugbyTeam
Pienaar perseveres with Mandela’s wishes by pushing his teammates to work hard both in training and with public relations events with black children. On the field the players are then very successful working together. Mandela also boosts team spirit by taking time to learn each player’s names and greet them in person at training and rugby matches.

5) Citizens of South Africa
At first the friction between blacks and whites appear impossible to unite. And yet through Mandela’s vision and the rugby team surpassing all expectations they begin to inspire the nation. When they finally win the World Cup all citizens of South Africa celebrate together despite the colour of their skin.

Sports films can be incredibly motivational for showing excellent teamwork and even more so when based on real events. And great teamwork is always inspired by great leadership! Be inspired to foster teamwork in your workplace or life despite the seemingly impossible odds or goals. Anything is possible when you have a dedicated, resilient team!

Posted by Emmanuel Lopez - Motivatorman at 9:52 AM