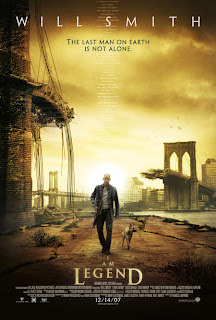 Recently, Toronto was hit by the biggest snowstorm in years. The storm also hit other parts of eastern Canada and the US burying cities with up to 2 feet of snow. And though the blizzard inevitably caused all sorts of street accidents and other problems there was a sense of beauty to the heavy snowfall.

Looking out my high bay windows that Sunday morning I had never seen downtown Toronto completely obliterated from sight by the blowing snow. The CN Tower was gone and even the apartment building right next to me was barely visible. The storm transformed everything I was used to looking at.

So in the early afternoon I went to see the just released sci fi movie, I Am Legend

starring Will Smith. I met up with a few friends who lived close by and we each trudged through the thick snow to the nearby Scotia Bank theatre.

The film was the perfect escapist movie to see that day. I Am Legend

takes place in the year 2012 where a virus has wiped out a majority of the earth's population. The aerial scenes of Smith's character and his dog alone in a dissolute New York City was breathtaking to watch. And having just been to NYC it was a shock to see the city in a whole new light.

All the familiar locations of Time Square and other parts of Manhattan were free of people and full of overgrown weeds. Wild animals now roam through the once bustling streets. And the movie explored the fun benefits of having an entire city as your playground. Imagine having every DVD/CD store all for yourself or driving anywhere you wanted at any speed!

The movie also shows how lonely one can be in a situation like this futurist story. It made me think of how grateful I was having the friends and family around me right now.

Going to the future in a movie like I Am Legend

helped me see how lucky I was in the present. Seeing the destruction of the future made me see the beauty of what I have now. That is the ultimate beauty of films - they can help mirror all the value and strengths in your life.

So let movies show you visions that will jar your current or rigid thinking. Let the storms in your life transform how you see things to bring new insights about yourself. See the value of what you have already around you.

This is a really great post - very well-written, insightful and a perfect analogy.

The storms in life are our roadblocks. One can choose to look at them as one day less to get Christmas shopping done or as the perfect excuse to forget your worries and enjoy what you have at this very moment.