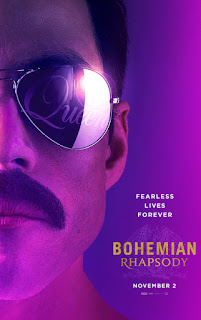 I’ve loved Queen’s music since high school especially how epic their Bohemian Rhapsody song was. We even studied the lyrics in Creative Writing class! I remember my first Queen album, The Game, and playing it over and over. I loved every song especially Another One Bites The Dust. I also loved their music for the soundtrack of Highlander (1986) with the stand out ballad, Who Wants To Live Forever.

I was sadden about Freddie Mercury’s passing from the Aids virus in 1991 and it wasn’t until I had my own life challenges in the 2000’s and 2010’s with depression that many of Queen’s empowering lyrics would inspire me to stay strong. Mercury continued to write and perform right until his death. His incomplete tracks were finally finished by the rest of the band and released on 1995’s Made in Heaven and it is absolutely amazing and ethereal. Mercury’s voice still sounded majestic as ever despite his illness and weakened state!

Mercury’s resilience and perseverance as an artist continues to inspire me when I face adversities. And now the biographical film Bohemian Rhapsody has become another entertaining film I can use as an inspirational learning tool.

The biographical film, Bohemian Rhapsody, is a celebration of the music by the rock band Queen and the life of lead singer Freddie Mercury (Rami Malek). This highly entertaining film is packed full of Queen’s famous songs as well as the successes and adversities they faced over the years. The cast included great look-alike actors Gwilym Lee as Brian May, Ben Hardy as Roger Taylor, Joseph Mazzello as John Deacon, Lucy Boynton as Mercury's wife Mary Austin and a great cameo by Mike Myers.
See: movie trailer
Watch now: Amazon Prime

Like most biographical films, this movie is not historically accurate and yet the story of Mercury’s inner strength as an artist is inspiring to watch. His struggles with his sexuality are also explored as well as the theme of family both with his own and his band mates. This film really celebrates the love of the fans as well as the love Queen had for their audiences.

There are many highlights with their iconic songs being created and my favourite was for their groundbreaking song Bohemian Rhapsody. The movie shows a scene with negative reviews filling the screen when the song was released. In hindsight this is laughable because of how popular the song is today but it is a testament to the genius, passion and perseverance of Mercury and the rest of the band who fought and believed in this epic masterpiece.

I was moved at so many scenes because of Mercury’s will to move forward no matter what and also seeing his gift for uniting his concert audiences. This is especially shown in recreating the massive Live Aid performance at Wembley Stadium in 1985 with 72,000 people in attendance. This film is a must see for all Queen fans and is definitely for anyone who is a musician with a dream. Mercury inspires us all to dream as big and as audacious as possible!

The power of a song can last for decades long after the artist or band has passed away. They can lift us up with its melody and empower us with lyrics that speak directly to our souls. Be inspired by your favourite songs and learn more about the artist behind those songs. Their stories could help you ride out the challenges you face in your own life or career.

Posted by Emmanuel Lopez - Motivatorman at 9:50 AM