Tip#1099: The Uplifting Power of Nostalgia, Part 7 – The Movie Music of John Williams 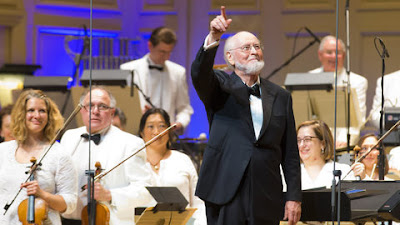 For me it takes just two or three notes of movie music by John Williams to instantly trigger feel-good memories growing up! Nostalgia floods my mind of happy times of when I first saw these films as a child, in high school, in college and even in my years as a business owner. Feel-good brain chemicals like dopamine and serotonin start flowing and then lifts my mental health where I feel like anything is possible!

I recently attended another exhilarating live orchestra and choir screening of the third Harry Potter film at The Sony Centre where John Williams’s iconic themes were played. Seeing a live performance like this allowed me to discover how many wonderful solos were on this soundtrack that included violins, oboes, bassoons, harps and harpsichord. This score was also nominated for an Oscar and now I understand why it was a standout for the Harry Potter film scores! Listen: Lumos! Hedwig's Theme

Superman The Movie (1978) The Extended Cut

I finally got a chance to see Superman The Movie, The Extended Cut with 45 minutes of extra footage. Though it was fascinating to see these extra scenes I found they really slowed the pacing of a film I grew up loving. But Williams’s famous themes still sent my heart soaring especially Superman’s triumphant main theme, scenes of young Clark Kent leaving his mother in Smallville and Superman’s interview and romantic flight with Lois Lane. Pure cinematic magic! Listen: Superman's Main Theme

As Jack Black’s character in the film The Holiday said, “BUH-BUHM! Two notes and you've got a villain. I don't know what to say about it. Totally brill!”. I remember so clearly the first time I saw Jaws in the summer of 1975  at The Golden Mile cinemas in Scarborough. It was so scary but also thrilling seeing it with an equally frightened audience. The music is just amazing and so simple. Just two notes! Totally brill! Listen: Jaws Main Theme

In the spring of 1977 and from the moment the title explodes onto the screen with the first orchestral notes I was hooked on Star Wars! I was at the Fairview Mall cinemas many years before their expanded renovations and remembered I had never heard a score like that before. And today, decades later, John Williams’s music still affects me emotionally with so much hope, adventure and optimism. Listen: Opening scene of Star Wars

I remember listening to the Star Wars LP record on the family record player in the living room countless times and it inspired me throughout my teenage years at high school. Today I am so excited that I have a ticket to see the live orchestra screening in January 2019 at the Roy Thomson Hall!

John Williams has created even more memorable themes from films like Raiders of the Lost Ark, Close Encounters of the Third Kind, E.T. The Extraterrestrial, Jurassic Park and Schindler’s List. He also composed two memorable themes for the 60’s TV show Lost in Space that I’ve always loved! As of 2018 Williams is the most nominated living person in Oscar history with 51 nominations. Yes Williams is my musical hero but not because of how nominations he’s received but because he has created music that will forever inspire me and move me deeply.

If you have favourite movie music that you loved growing up remember to listen to it whenever you want to lift your spirits and fill your heart with re-energizing nostalgia! See these movie soundtracks you grew up with as your personal empowerment and inspirational tools you can always count on to rejuvenate your positivity. Feel good today with an awesome cinematic score!

Posted by Emmanuel Lopez - Motivatorman at 10:00 AM