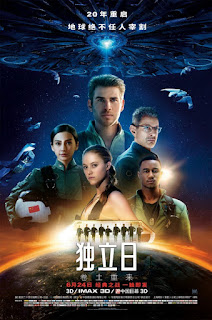 After the recent thrill of seeing the new Ghostbusters film (see tip#974) I was in the mood for another summer popcorn movie and knew I had to see Independence Day Resurgence on the big screen. Alas the difference between both was that Ghostbusters was much better as a cinematic experience even though both were tapping into nostalgic feelings of their first films.

Independence Day Resurgence was considered a box-office disappointment in North America but did better internationally though I always remain open in my opinion. And with most films I see there were several “golden nuggets” or silver linings I found from this movie. These are the moments I feel a positive emotional charge from whether it’s a specific situation or quote by a character. These meaningful moments are the same benefits you can receive from any film good or bad if you are open to it.

Note: I chose to show the Chinese version of the movie poster because it was much warmer than the North American one!

The science fiction action film, Independence Day Resurgence, is the sequel to the 1996 film, Independence Day, and takes place 20 years later where Earth has developed hybrid alien technology in preparation for more alien attacks. Despite flaws in the film it is still entertaining and showcases some visually stunning sequences and the welcome presence from returning stars Jeff Goldblum, Bill Pullman, Judd Hirsch, Brent Spiner, Vivica A. Fox and William Fichtner. See: movie trailer 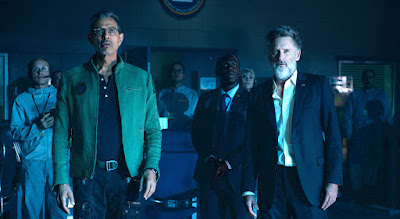 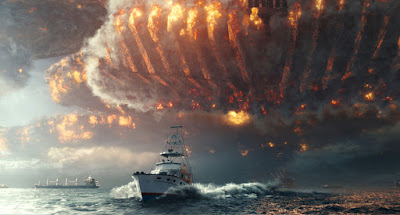 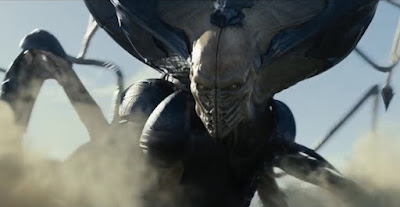 Yes some of the action scenes were overblown like the enormous size of the alien mothership that’s 3,000 miles (4,830 km) in diameter. And yet it felt great seeing the return of Goldblum, Pullman, Hirsch and Spiner as well as the amazing special effects, spaceships and alien characters. And the moments (golden nuggets) that moved me were the most human messages of the film. It was about how disasters and crisis unite people of all differences and beliefs. And these are important messages especially with the race problems and protests currently happening today.

“We always knew they were coming back. But look how far we’ve come. In the last 20 years this planet has been unified in a way that’s unprecedented in human history. That’s sacred. That’s worth fighting for. We convinced an entire generation that this is a battle we can win and they believed us. We can’t let them down. It wasn’t luck last time. It was our resolve.”

Resolve is defined as firm determination to do something and to settle or find a solution to (a problem, dispute, or contentious matter). It is this term and the vision of global unity that I took away from this film. That is the silver lining I hope you take away too should you see the movie.

Each person can have a difference of opinion when it comes to the same film. They may feel so passionate about their opinion that it could lead to fighting over who is right or wrong. My wish and vision is that movies help unify people and focus on the shared values of a cinematic experience. Those are the ultimate benefits of the power of movies for our planet!

Check out this awesome mock news special highlighting the exciting alien hybrid technology and cultural diversity in the film: The War of 1996 | A United World News Special

Posted by Emmanuel Lopez - Motivatorman at 9:10 AM