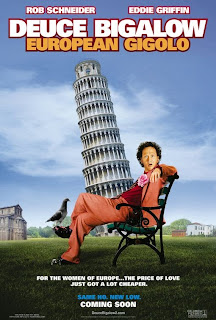 There was once a time when I felt very low energy and a lack of enthusiasm for over a week. I had already done most of the things I knew to lift myself up like treat myself to favourite movies, chocolate and delicious foods. These methods certainly helped but I needed something else and couldn't remember what.

Soon after, a good friend of mine insisted I come over to his place and sat me in front of his new high definition television as if he had the magic answer. Of all the movies he could have chosen to show he picked Deuce Bigalow, European Gigolo

starring Rob Schneider. As I surrendered to this unusual choice I found myself laughing out loud at all the stupid, crude toilet humour in the film.

My friend did know the secret to lifting me up and it was to make me laugh.

I remembered the feeling inside me as I laughed. Something surged through my blood, transforming this heavy energy inside me to something much lighter. The cloudiness and lethargy I was in quickly dissipated as the physical act of laughing put me into a new state of mind. I felt good again!

After I analyzed my situation I remembered that laughter stimulates positive brain chemicals like serotonin and dopamine. It also stimulates the body's secretion of endorphins. These are the body's natural painkillers and they produce a general sense of well-being. I have written before that endorphins are also connected to chocolate (see tip#27). Medical studies have shown that a good belly laugh can also reduce stress hormones, decrease pain, lower blood pressure, and even boost the immune system.

is based on a real person utilizing the healing power of laughter and humour. The real Patch Adams

was a pioneer for introducing endorphins in his philosophy for the medical values of laughter. "Treat the patient not the disease" was Adams approach. Even the name of his medical centre will make you smile: The Gesundheit! Institute.

In the movie, Williams own brand of humour helped fill Patch Adams

with hilarious jokes and sequences that not only make his patients laugh but you as well. For years Robin Williams

has always made me chuckle. Ever since he first burst out on the scene with his TV series 'Mork & Mindy' he always got me laughing when his humour goes into 'turbo'. I especially enjoyed seeing him being interviewed on talk shows because he was so manic that I laughed as much for his antics as seeing how the interviewer responds.

As for the Deuce Bigalow

movie, I realized afterwards that it was a Happy Madison Production. This is the film production company founded by actor, comedian Adam Sandler.

film did the trick in making me laugh and feel better.

Strangely I don't get tired of seeing Sandler's films over and over again. It's like laugh medicine that goes down so easily. Some of my favourites include:
Big Daddy

Not only did these films make me laugh I’d appreciate the redeeming, positive messages that Sandler's goofy characters always learned from.

had won Sandler new respect with audiences, I will always know it's Sandler's original rude and crude comedies that is tried and true laugh medicine for me.

films. Both comedians also happen to be Canadian. Carrey was born in Newmarket, Ontario and Myers in Scarborough, Ontario.

always made me laugh with his putty like facial expressions. His physical humour is so over the top in his earlier movies he looked like a living cartoon character. I'll always remember seeing Ace Ventura, When Nature Calls

with a friend where she couldn't stop laughing. Even when there were no jokes going on she was still laughing from the previous gag. Her giggling made me laugh even more. Laughter really is contagious.

and his Austin Powers

film is comedic genius for me especially the opening sequence. I won't describe it in case you haven't seen it yet so please check it out. What makes Myers's movies fun is the amount of improv that is caught on film. And if you see the Austin Powers Goldmember

dvd check out all the deleted scenes and you'll see many funny bits that just couldn’t fit into the movie.

Another new favourite comedian is another Canadian, Russell Peters.

I'll always remember the first time I saw his comedy act from his first Comedy Network special. It came at a time when I needed my spirits lifted and Peters did the trick. What got me laughing was his incredible impressions of ethnic groups.

Peters has a gifted ear and made me laugh with his flawless Chinese accent and facial expressions as well as his own background of East Indian impressions. No one was spared in his comedy acts. He slipped into flawless accents of Italians, Caribbeans, Africans, Jewish and even "hidden" Canadian accents. I laughed out loud because Peters wasn't really making fun of anyone, he was just telling humorous stories of people he'd experienced. Peters allows us to enjoy laughing at ourselves and the silly things we do.

I feel Peters is a great new ambassador of laughter for the multicultural communities of Canada. Not only is he a visible minority he is also highlighting communities that are normally invisible into mainstream media. According to Wikipedia, his popularity overseas is enormous. For example in Dubai, his tickets sold at a rate of one ticket every two seconds, crashing the on-line servers and creating pandemonium at the retail outlets.

What Makes You Laugh?

So start making your emergency list of all that makes you laugh. It'll come in handy when you find yourself in a low energy state, feeling confused or lethargic. Your list will be a beacon of light waiting to re-energize you.

Remember everything that tickles your funny bone and treat yourself to a good belly laugh once in awhile. And if your stomach feels sore that's okay because laughter exercises ten different muscle groups. Just think, you'd have treated yourself to a great workout too!

"I am thankful for laughter, except when milk comes out of my nose."
Woody Allen

Posted by Emmanuel Lopez - Motivatorman at 8:49 AM

Hope you had a good weekend. By the way, I think you are just brilliant.

We seem to be on a similar journey. The things you write about are the themes that are foremost in my own life... the wonder that is the universe and becoming more aware of its many miracles, and transforming our daily experiences.

It's been a struggle for me as well. After spending 5 years in an isolated Tibetan Buddhist community to find myself, I came back to Toronto in 2003 to start something from nothing. The good news is that people like you and I see the potential in our difficult situations and rise to the challenge.

I'm sure you will have even greater success to come.