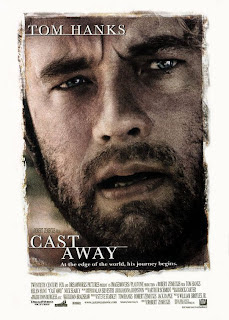 At some point we all reach crossroads in our lives and careers where we have to make difficult decisions of what to let go of and what to keep. Some are physical items and some are old ways of thinking. And sometimes the physical items represent what's inside you that must be released. Ultimately we must let go of what we've become comfortable with in order to make room for the new to come into our lives.

Currently, I'm at a crossroads in my life and career where I can see my biggest dreams coming true over the next horizon. And I know that for new successes to enter my life I have to let go of items I've gotten use to having around me for years. So now I feel I'm being prodded by the universe to look at what I need to let go of. It can be a real challenge knowing what to keep and what to "cast away".

The drama film Cast Away

is a powerful guide and motivator for doing major spring cleaning in your life. It's a story of a man, played by Tom Hanks, learning to survive on a deserted island. The title itself is a subtle irony because it is not spelled as a noun, 'Castaway' but rather a verb, Cast Away.

The movie is a journey that shows you the basics of what you need to survive, the necessities you take for granted and the importance of letting go.

There are many clever metaphors and symbolism throughout the movie. Hanks's character is named Chuck which is also a word meaning 'to throw out; discard'. While on the island Chuck creates a companion out of a volleyball he calls Wilson. Wilson becomes his only source of companionship over the years he is isolated and it helps keep him sane. A powerful bond was made between Chuck and this inanimate object.

When Chuck finally leaves the island, Wilson accidentally drifts away from the makeshift raft causing him much anguish. In reality, Wilson was only meant to serve the purpose of companionship on the island during Chuck's phase of his life there. It is a metaphor that even the most meaningful connections we make to people and things have to be released in order for you to move forward.

Spring Cleaning For Your Soul

So look around your space at home and look carefully at items that have been there so long they've become part of the walls. Ask yourself why are you still holding onto these things? What is the value attached to it? Have these items served its purpose?

For example these items could be clothes that you don't wear anymore that represented good times that are hard to let go of. These emotional attachments can be a big challenge but must be faced to free yourself of unnecessary baggage. Identifying what these items mean to you is the first step in letting go. Some items may be the dead weight holding you back from achieving your dreams.

Do your best to lighten your load and let go of your excess baggage. You probably won't need it where you are going anyways. And at the very least, you'll feel lighter outside yourself as well as in.

"Sometimes you have to pull out the weeds in your garden in order for more green grass to grow."
Anonymous

Posted by Emmanuel Lopez - Motivatorman at 8:01 AM

I never thought of the movie in those terms. I always thought of it just in terms of the main character being the "castaway".

Interesting to think of it more in terms of what he (or anyone really in that situation) had to (or would have to) cast away in order to survive...old beliefs, comforts, even life partners...