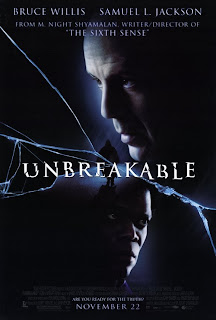 Resilience is defined as the ability to recover quickly from illness, change, or misfortune.

Wouldn't it be fantastic to have a super power for being indestructible? One of the characters from the hit TV show Heroes

is a high school cheerleader with this gift. The series shows ordinary people of all ages discovering they have a super power, hers involves the ability of spontaneous regeneration. You see her in car crashes, getting burned, falling from buildings, being impaled and getting her fingers mangled. She's survived it all.

The popular character, Wolverine from the X-Men

comics and movies has a similar power of rapid healing. In the three X-Men

movies Wolverine is played by Hugh Jackman and you see him get cut deeply many times and instantly see the wound seal itself every time. Or when he is shot you see his body internally push out the bullet, stop the bleeding and then seal the wound cleanly.

who is, of course, unbreakable. At first Willis's character doesn't want to believe he has this extraordinary power but later learns to see it as a gift. Director, M. Night Shyamalan, created a down to earth story out of a basic superhero concept for Unbreakable

making super powers believable within an ordinary family setting. Being unbreakable is an amazing ability the main character finally accepts.

In a lot of ways I believe we have the mental equivalent of this super power within each one of us. Resilience is the name of that power. Believing that you have that power is the first step to developing the confidence that nothing or no one can truly hurt you.

Visualizing the possibility is a powerful method to help you start believing in your resilience. Activate your imagination and you'll picture your hidden potentials. Here's a list of movies to inspire you:

A Beautiful Mind (2001)
This biographical drama is based on a true story about a man who perseveres despite a debilitating mental disorder.

Bridget Jones's Diary (2001)
This romantic comedy is about a woman who survives embarrassing insults and societal expectations.

Cast Away (2000)
This adventure drama is about a man who survives many years on a deserted island.

This biographical sports drama is based on a true story of a man surviving with a family during years in poverty in the great depression.

This political drama is about a woman who perseveres despite overwhelming public and political pressures and scrutiny.

This biographical drama is based on a true story where a man survives homelessness and loss of purpose in life.

This adventure film is about a wrongly convicted man who perseveres despite hopeless, long term conditions imprisoned.

This adventure drama is about an elderly man who survives in a northern wilderness using his wits and resilient attitude.

This biographical drama is based on a true story where a woman perseveres despite personality conflicts and corporate antagonists.

This fantasy adventure series is about a group of diverse individuals who survive ongoing and relentless mental, emotional and physical challenges in order to achieve a goal.

This screwball comedy is about a small town man who survives emotional stress and public ridicule in a big city.

This political comedy drama is about a small town man who remains resilient despite overwhelming public and political opposition.

This historical drama is based on a true story of a man surviving for years under Nazi persecution and forced isolation.

This biographical drama is based on a true story where a man survives homelessness with a young child while pursuing his dream of becoming a stockbroker.

This sixth installment of the Rocky series is about a man now in his late 50's maintaining his resilience despite life's ongoing punches and the death of a loved one.

This drama is about a wrongfully accused man who endures years of mental and physical abuse in a prison.

These movie examples have all helped me so much in many ways. To me all the main characters are super heroes. They've helped me picture positive possibilities, given me strength to keep moving forward and lifted my spirits when my energy felt depleted.

Movies helped unleash my resilience during my mid-life transition that hit in the year 2000. I learned how to survive the loss of employment, loss of income, loss of purpose and the painful loss of my father. Magically, movies always arrived when I needed them most and prodded me to persevere and recognize all my hidden abilities and strengths.

Always remember that doesn't matter whether you are too old or young, big or small in order to have the power of resilience. That’s partly why the TV series Heroes

has become popular beyond its special effects. Each episode shows examples of ordinary people young and old and of diverse ethnic backgrounds discovering awesome powers they had been born with. Let that exciting concept mirror your own extraordinary possibilities.

So explore the movies you are drawn to. Sometimes you don't pick movies - they pick you. Be inspired by the movie hero's choice to keep going forward despite the harsh conditions they are placed in. Witness the pain they endure in order to persevere and accomplish their goals.

Let the stories trigger your dormant abilities, hidden strengths and resilience. And next time, when you are put into difficult situations, you may be surprised at how powerful you truly are.

"It's hard for many people to believe that there are extraordinary things inside themselves, as well as others. I hope you can keep an open mind."
Unbreakable

Posted by Emmanuel Lopez - Motivatorman at 6:48 AM

I wanted to share that I appreciate your blogs. They are consistently evolving ... into special snippets of wisdom, observation and inspiration. Good job!

I Love it! I also love the movie selection. I do believe you have much to add if this could run as a column somewhere!
Keep 'em coming!