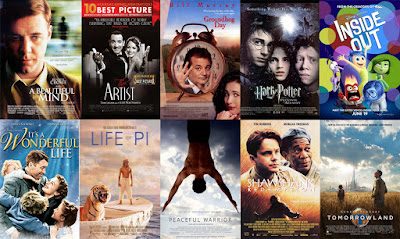 This special post is in response to audience members from my motivational talks asking for my top 10 inspiring movies for managing depression. They were very interested in film resources that could help them understand what their loved ones, friends or coworkers were dealing with.

This list covers life-saving films that got me through my most challenging times as well as continually empower me thanks to repeat viewings. They help me remember my inner strengths and to focus on the positives as I cope with symptoms such as loss of focus, hopelessness, thoughts of death, social withdrawal and mind forms of paralysis. These films empower my mental health and wellness! I believe they can do the same for you or someone you care about.

This Oscar winning film is based on the true story of Dr. John Nash (Russell Crowe) and his perseverance and resilience through years of mental illness. His will to continue to live and teach others despite his mental challenge is inspiring! Equally important is the unconditional love and support from his wife Alicia Nash (Jennifer Connelly). Together their story is a reminder of how important supportive relationships are during mental challenges and other difficult times.

This is another Oscar winning film that is surprisingly entertaining and uplifting despite being a silent, black and white movie. It’s a story of actor George Valentin (Jean Dujardin) dealing with an unexpected career crisis and depression and it will remind you that there are always solutions even if you cannot see it in the present. It is also a reminder that love, support and friendship are available as long as you are open to receiving it.

This romantic comedy is brimming with life lessons and is a massive metaphor for the feeling of being caught in an endless loop like living with depression. The movie hero Phil Connors (Bill Murray) discovers and demonstrates multiple coping solutions after identifying the silver lining of his personal hell of living the same day over and over again. His journey will fill you with unlimited hope and laughter to keep moving forward no matter what.

Harry Potter and the Prisoner of Azkaban (2004)

This third chapter in the Harry Potter film series was always my favourite and became even more meaningful when I discovered that its author, J.K. Rowling, suffered clinical depression while writing the first book. She also created the film’s dark characters, the Dementors, as a representation of what depression felt like to her. As she said in an interview with Oprah Winfrey, "It’s that cold absence of feeling – that really hollowed-out feeling. That’s what the Dementors are.". This movie also shares a powerful message that can be applied in real life, through the metaphor of a magic spell, for focusing on positive thoughts and memories instead of the darkness and despair.

I believe this Disney Pixar film is the greatest all-ages movie about depression! There is a moment that clearly illustrates my experience with depression when 11 year old Riley (Kaitlyn Dias) is introducing herself to her new classroom and is suddenly disconnected from all her emotions. This powerful scene demonstrates that depression isn’t a feeling of sadness but of being void of all feelings. This film is a fantastic tool to help create dialogue for those needing help both young and old.

This Christmas classic is actually a prime example of the learning and benefits of Cognitive Behavioural Therapy (CBT).