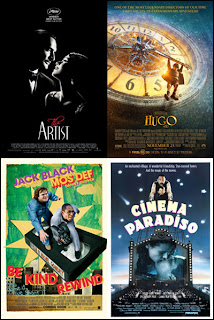 The films The Artist and Hugo dominated the recent 84th Academy Awards. The Artist tied with Hugo winning 5 Oscars including best picture. What I loved is that both these films celebrated a love for cinema! They remind everyone everywhere of the magic and power movies offer for our hearts and minds.

I love watching movies whether it's on my computer, with friends on their big flat screen TVs or in the private screening rooms of my clients. And yet nothing beats going to a theatre with huge digital projection, surround sound and an audience! You are immersed in a sensory experience that truly activates and stirs your emotions. Here are 4 examples of movies that love movies…

This black and white silent movie captures the early magic of cinema. It tells the story of silent film star George Valentin (Jean Dujardin) enjoying his success and then needing to deal with the film industry's transition into talking pictures. You will experience the silliness and charm of actors with their exaggerated facial expressions and gestures to tell a story.

One of the story lines in this movie celebrates the groundbreaking silent films of Georges Méliès (Ben Kingsley). In the story Méliès deals with depression over the end of his film-making days but is rejuvenated when a little boy, his friend and a film admirer reminds him of the lasting power of his film work. He is reminded that he touched people's hearts for years even though he never knew it.

This comedy is about 2 video rental store workers Mike (Mos Def) and Jerry (Jack Black) who accidentally erase every tape. They come up with a wild idea and begin to re-shoot the movies using their own camera and zero budget. They hilariously re-create Ghostbusters, Driving Miss Daisy and Rush Hour 2 among others. Their endeavors end up cultivating a powerful spirit of community in their neighbourhood.

This film is about a filmmaker (Salvatore 'Totò' Di Vita) who remembers when he fell in love with movies as a child just after World War II. He also recalls his deep friendship with the theatre's projectionist (Philippe Noiret) in his village. Though this movie is in Italian it demonstrates that the love of cinema is universal and can have strong, emotional effects that last a lifetime.

If you love movies then be aware that your passion is what energizes your life, career or business. The positive emotional energy you feel can fuel you during difficult times and just make you FEEL GOOD! Loving movies is shared all over the world so celebrate that you are already part of a massive global community!

UPCOMING WORKSHOP:
BE MAGNETIC IN YOUR SOCIAL NETWORKING
How to have meaningful relationships on social media and face to face
Toronto, Canada, Tues. March 6th, 7pm
SEATING IS LIMITED
Details: Click here

DO YOU KNOW SOMEONE GOING THROUGH DIFFICULT TIMES?
Send them this list of movies that will inspire, empower
and motivate them forward!
See: Click here

NEED ONE-ON-ONE CONSULTING ON
HOW TO USE THE POWER OF SOCIAL MEDIA?
Check out my: Social Media Wingman Website


Posted by Emmanuel Lopez - Motivatorman at 10:28 AM

If this blog has helped you please donate and support this blog!