Tip#1151: Why Keanu Reeves is an Inspirational, Awesome Human Being - Little Buddha - Speed - The Devil’s Advocate

I remember in the early 90's having brunch with friends at Taro Bar & Grill on Queen St. West in Toronto when we suddenly saw Keanu Reeves walk by the big front windows. It was a thrill for me and it prompted stories my friends had heard about Keanu being such a nice guy in person. I would continue to hear wonderful, heartwarming stories about this celebrity for years to come!

Keanu has made many entertaining films that I’ve featured on my MoviesForMotivation.com website and blog. At the same time he has been an inspiration for me personally for being a compassionate, humble, down-to-earth human being! One example of his generous, thoughtful spirit is the viral video of him giving up his seat for a woman in a subway car. Plus it’s also the idea that Keanu was riding a public subway car in the first place! See: Keanu's Subway Act of Kindness

I recently saw another clip of Keanu on The Ellen DeGeneres Show revealing that he had a crush on Sandra Bullock while filming Speed in the early 90’s. Sandra had actually revealed having a crush on him on Ellen's show as well. The audience was delighted! This was around the time when three movies Keanu was starring in was being released: John Wick 3, Always Be My Maybe and Toy Story 4. Suddenly Keanu was being featured on many YouTube video compilations celebrating this amazing man! See...

This all inspired me to rewatch three of his early films from the 90’s that I’ve always enjoyed but haven’t featured yet on my movie blog: Little Buddha, Speed and The Devil’s Advocate

The fantasy drama film, Little Buddha, is about a young boy Jesse (Alex Wiesendanger) in modern-day Seattle who Tibetan monks believe might be the reincarnation of their great Buddha teacher. It also intercuts with the story of how Prince Siddhartha (Keanu Reeves) found enlightenment 2,500 years ago and became Buddha. This lush and visually stunning film was directed by Bernardo Bertolucci and also stars Bridget Fonda, Chris Isaak and Ying Ruocheng.
See: movie trailer
Watch now: Amazon Prime 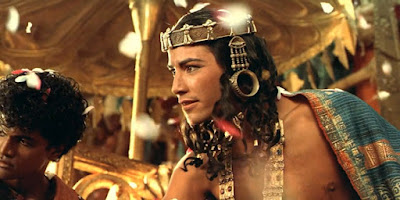 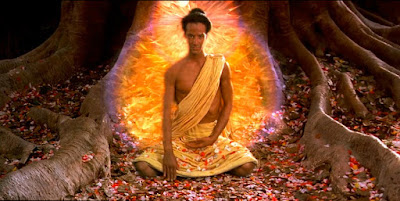 This magical film explores the dedication of Prince Siddhartha and his spiritual quest in many memorable scenes including the powerful finale. Keanu is highly engaging and almost unrecognizable at first as Siddhartha and goes through several physical transformations. I’ve always loved this movie as it reflected my own spiritual journey in the 90’s. I also believe that this character really embodies the kind spirit of Keanu in real life! I highly recommend you see this hidden gem of his.

The action thriller film, Speed, is about Jack (Keanu Reeves) an LAPD police officer who tries to rescue civilians on a city bus rigged with a bomb programmed to explode if the bus slows down below 50 mph. This gripping story features many memorable moments and also stars Sandra Bullock, Dennis Hopper, Joe Morton, and Jeff Daniels.
Watch now: Amazon Prime 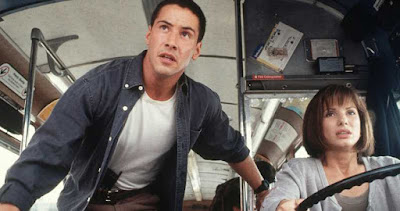 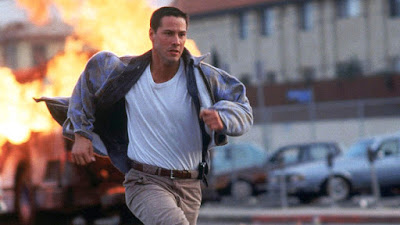 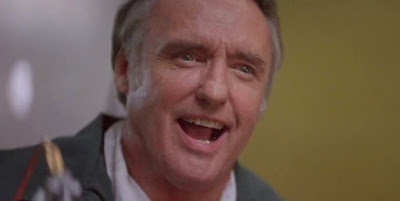 Jack demonstrates many leadership qualities while in the face of intense pressure such as perseverance, resilience, resourcefulness and teamwork. I was also inspired by the sense of community and support of all the bus passengers who, because of their shared pain, bond and help one another through this ordeal. Keanu clearly established himself as an action hero with this movie! 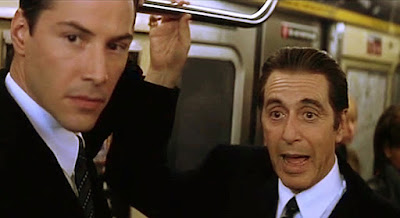 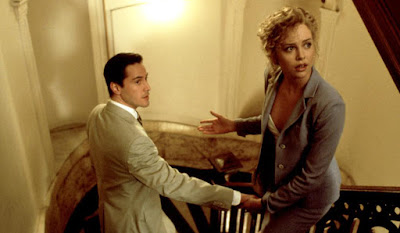 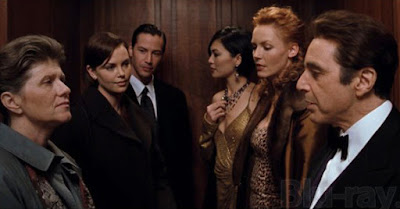 This film is really freaky with it’s surreal, horrific moments and Pacino’s charismatic yet creepy performance and appearance. The story also has powerful messages and life lessons about the ethical choices we make in life and the harsh consequences that result. Keanu also delivers an emotional performance as an unbeatable lawyer faced with unexpected tragedies and truths about who he really is in relation to Milton.

There are many movie stars that portrait heroes on the big screen. And then there are movie stars like Keanu Reeves who is also a hero in real life for every day people he comes across. Keanu is constantly celebrated for his films and humanity on social media and this is my special shout out for his continued service to others and for inspiring me! How about you? Has Keanu inspired you in a meaningful way?

Posted by Emmanuel Lopez - Motivatorman at 10:25 AM